The grounds on which the Dachau concentration camp was located between 1933 to 1945 have been subject to constant change from 1916 down to the present day. To the visitor, the Dachau Memorial Site and its direct surrounds presents itself as an area that has been reshaped and changed over decades. The single layers of a period are not immediately obvious or understandable.

Constant reshaping of the grounds

Sections of the land were being utilized even before the erection of the Dachau concentration camp in 1933. This existing stock of buildings was incorporated into the concentration camp: the still existing buildings of the former gunpowder and munitions factory from the period before the First World War were used to some extent. In 1937/38, the SS then had a new, larger prisoner camp built, demolishing the first prisoner camp. The buildings to be seen today on the Memorial Site grounds are from the period after 1937/38. There are hardly any traces left of the topography of the first prisoner camp.

The grounds of today’s Dachau Concentration Camp Memorial Site, located in the northeastern part of the town of Dachau, makes up only a small fraction of the area once covered by the historical Dachau concentration camp: it encompasses the former prisoner camp, the access and the crematoria areas. Also belonging to the Memorial Site are places of remembrance outside the designated grounds: the former “SS Shooting Range Hebertshausen”, the concentration camp cemetery of honor on the Leitenberg, and the woodlands cemetery.

As in other concentration camps, the camp complex in Dachau was made up of different sections topographically and functionally separated from one another: besides the prisoner camp, these were the commandant’s headquarters, the SS training camp, the SS residential estate, as well as a host of workshops and production facilities. Including the SS agricultural experiment stations/plantation located to the east of the prisoner camp, the grounds covered in total some 203 hectares.

Building on and reuse of the area continued after 1945. Shortly after liberation, the U.S. authorities turned the former prisoner camp and sections of the onetime SS area into an internment camp. Following its closure, the former camp barracks were altered to such an extent to accommodate German refugees that they then had to be demolished in 1965 as the Memorial Site was opened.

Our multimedia online presentation shows the topographical changes to the grounds and the buildings. Different historical phases can be compared with one another, while information is available on inaccessible buildings as well as regional and international events and developments relevant to the grounds.

The presentation is not optimized for mobile devices. 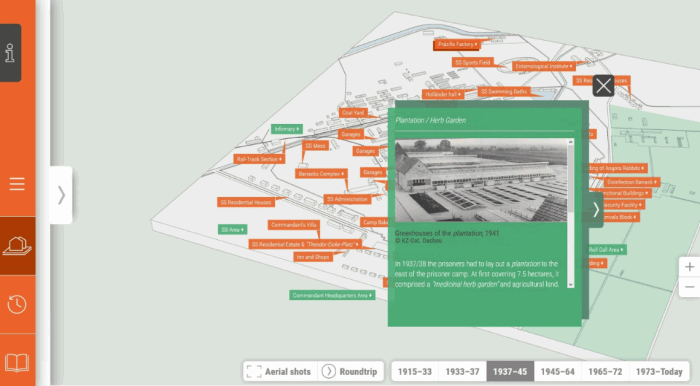 To the interactive application