As a comparison of the two aerial photographs from 1945 and 2006 shows, the Memorial Site does not exactly cover the geographical expanse and structural makeup of the concentration camp. After the war, a diverse variety of reuses reshaped and changed the grounds and its building structures. Numerous historical structures were modified, demolished, or destroyed. In some cases only traces and relicts remain.

The development of the grounds into the Dachau Concentration Memorial Site, opened in 1965, followed the principles advocated by the involved survivors, to renovate and preserve the historical building substance considered especially relevant and significant for representing the suffering of the prisoners. Other building remnants were deliberately removed.

Today, the physical remains of the camp’s grounds serve as the starting point for presenting the historical repercussions of the politics of persecution and extermination pursued by the Nazi regime. The methodological guideline for developing and arranging the grounds is to secure the relicts and mark them as such. Subsequent reshaping and changing is identified and marked as an added historical layer.

As a place of learning and critical discussion about the history of National Socialism, the Memorial Site has the character of a museum. Exhibitions in the historical buildings meet this task, while in outdoor areas information panels provide orientation for visitors.

Numerous monuments, memorial stones, commemorative plaques, and gravesites are also located on the grounds. As a place of remembrance for the victims of the Nazi regime, the Memorial Site has a particularly important and significant role to play in international commemorative culture. 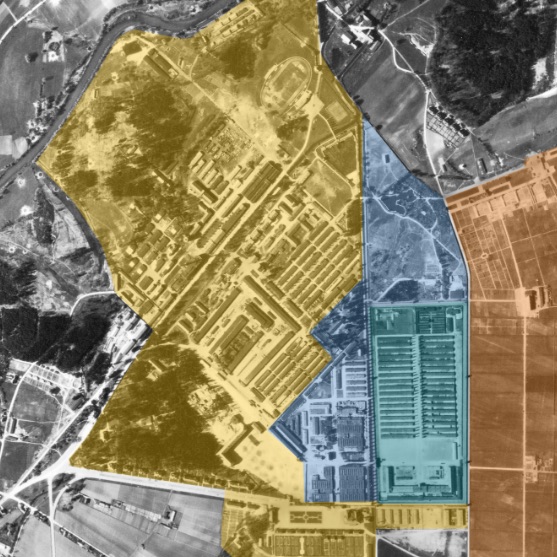 The green area covers the prisoner camp. The 34 symmetrically arranged barracks are clearly visible. Prisoners were quartered in 30 of them.

The orange area marks agricultural land the SS euphemistically called the “herb garden”. The area was part of the “Deutsche Versuchsanstalt für Ernährung und Verpflegung GmbH” (DVA), an institute established by the SS for the purpose of cultivating and researching medicinal plants. From 1938 onwards, prisoners carried out forced labor here. Due to the brutal working conditions enforced to cultivate the land, the prisoners named it the “plantation”.

The yellow area is the SS training camp. Here SS men were indoctrinated ideologically and drilled militarily. Also located in this area were administrative, residential, and various storage buildings as well as workshops in which concentration camp prisoners were forced to work. Towards the end of the war, the grounds of the Dachau concentration camp covered more than two square kilometers. 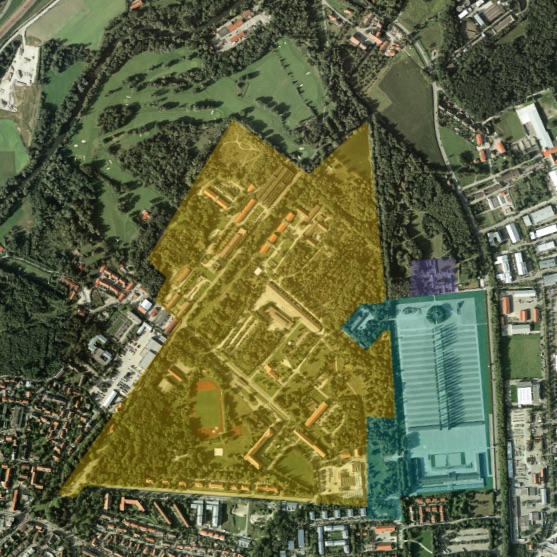 On a large part of the former concentration camp, once the grounds of the SS, are buildings and facilities of the Bavarian Riot Police. The marked yellow area is separated from the Memorial Site by a fence and not accessible to the public. After the war, the American military government used the former SS area as an internment camp and garrison base. In 1972, the Bavarian state government took over the area and based a division of the Bavarian Riot Police there.

The grounds of the former SS experimental agriculture facility/”herb garden” is today largely overbuilt with commercial and industrial firms, but the main ensemble of buildings remains. Today it is owned by the City of Dachau.