The main exhibition focuses on the fate of the prisoners. The leitmotif is the “path of the prisoners”: their arrival in the concentration camp, life in the camp, and the path that led to death or liberation. This is presented in various ways: reports and drawings by prisoners, biographies, and explanations of the historical locations.

Banners (with biographical information on the prisoners and the individual prisoner groups) and panels (historical background) are the key design elements in the exhibition inside the building. Over a number of years, objects as well as video and media stations have been added to the exhibition.

The exhibition is divided into six sections and these are spread across 13 rooms and areas. 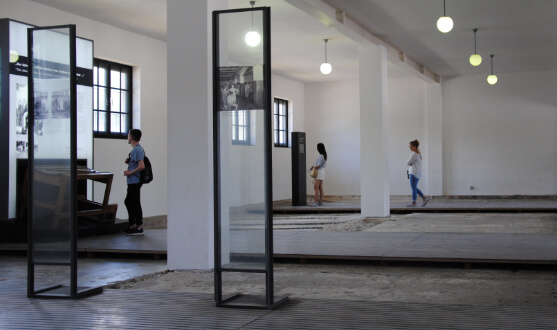 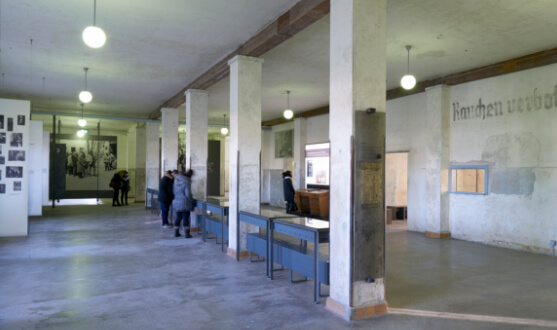 Structure of the exhibition

The first phase (covered by sections 3 to 6) spans the years 1933 to 1939, as the concentration camp was used as an instrument of terror to eliminate political opposition and persecute so-called “community aliens”. In this function the concentration camps were decisive in bolstering and extending the power of the Nazis as well as preparing for the coming war.

The second phase (section 7) corresponds to the years of German military success in the war, from 1939 to 1941 as the concentration camps were turned into a tool of war policy: prisoner labor became an instrument of extermination, with prisoners no longer “able to work” sent to killing centers, while the camps became execution sites where the intelligentsia and elites of those regions under German occupation, along with Soviet prisoners of war, were murdered.

The third phase (sections 8 to 12) covers the years from 1942 to 1945 and is entitled “Prisoners in the Armaments Industry”. The exhibition documents the final years of the Dachau concentration camp, focusing on its role as the center of a network of subcamps spread throughout southern Germany and Austria. Liberation brings this phase to an end.

Located at the end of the permanent exhibition is the Memorial Room. Here there are currently over 130 commemorative plaques and stones. The room serves to commemorate individual persons and groups imprisoned in the Dachau concentration camp. Private persons and institutions are able to donate panels to commemorate victims of the Dachau concentration camp. For further information please contact our administration.

The texts in the exhibition and the outside area are bilingual (German and English). The exhibition panels can be downloaded in PDF format from the website of the House of Bavarian History.

History of the exhibition

The current main exhibition of the Memorial Site was opened in 2003. The redevelopment was begun in 1997 by the House of Bavarian History, with the involvement of the Comité International de Dachau and the directorship of the Memorial Site. An expert advisory board accompanied the project. The State Engineering Office Freising was responsible for the required building measures. The overall project was the responsibility of the Bavarian Agency for Civic Education.