The camp grounds are used to house former prisoners who are sick and unable to return to their onetime homeland or are waiting to be repatriated. The U.S. government provides them with food and medicine. 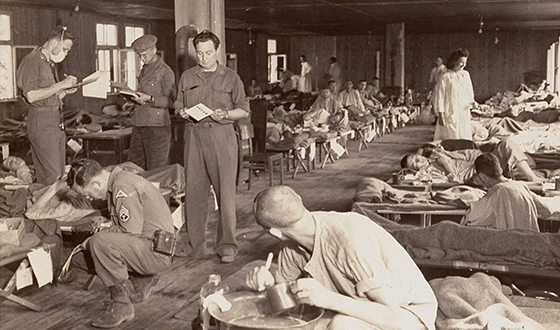 The U.S. military uses the former SS camp and the former prisoners’ camp for the internment of Nazi party officials and members of the SS. The Dachau Trials take place on the grounds of the former SS camp; 489 trials are held, hearing 672 indictments, before American military courts. 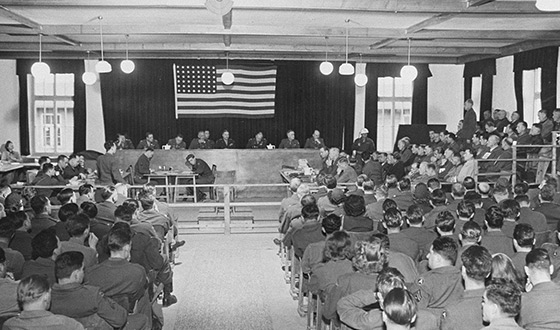 The U.S. military authority returns the grounds of the former prisoners’ camp to the Bavarian state. A reception camp for expelled Germans is built that is later called the “Dachau East residential estate”. 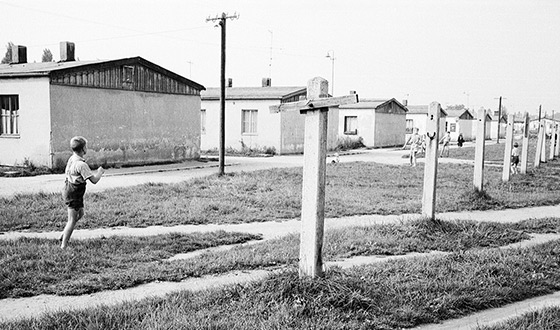 The International Camp Committee reforms as the Comité International de Dachau (CID). A supplementary agreement to the Paris Treaties places the graves of victims of the Nazi regime under special protection. This prevents the planned imminent demolishing of the former crematorium from going ahead.

An advisory board, comprising representatives from public institutions and associations whose members almost entirely come from the circle of former victims, joins the CID in demanding the creation of a memorial site.

Johannes Neuhäusler, auxiliary bishop of Munich, has the Mortal Agony of Christ Chapel built on the grounds of the former prisoners’ camp; the chapel is consecrated during the Eucharistic World Congress with 50,000 persons in attendance. 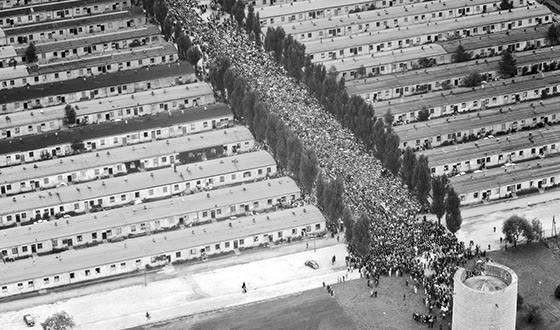 The CID and the Bavarian state government agree to create a memorial site on the grounds of the former prisoners’ camp. Demolition work on the barracks – dilapidated and greatly altered by the various uses since 1945 – commences and two replicas are built. In addition, it is planned to repair the walls and guard towers. 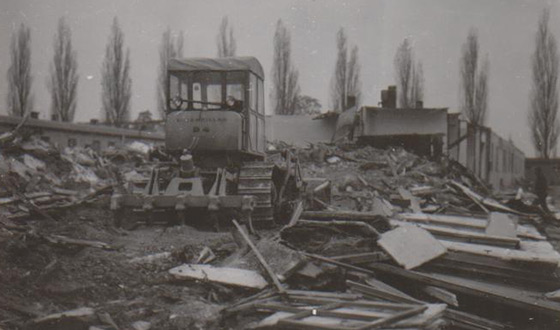 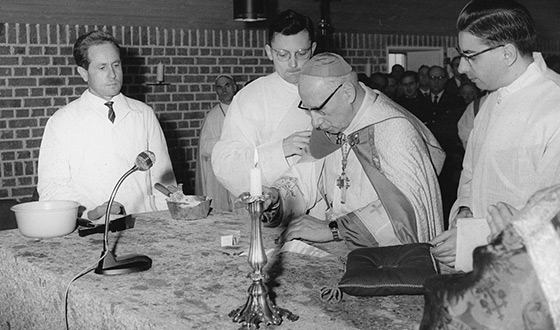 On May 9 1965 the Dachau Concentration Camp Memorial Site, which includes a new documentary exhibition, is opened. 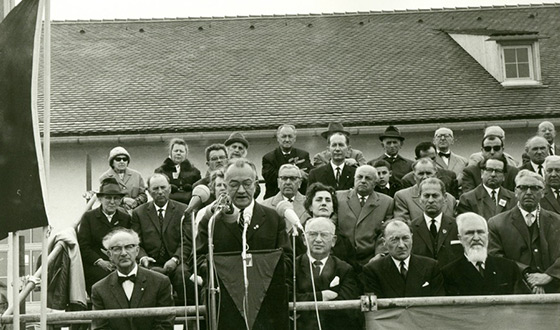 Address given at the opening of the Dachau Concentration Camp Memorial Site, May 9 1965 (CID)

The Bavarian Regional Bishop Hermann Dietzfelbinger consecrates the Protestant Church of Reconciliation on April 30 1967. The Jewish memorial is consecrated by Rabbi David Spiro on May 7 1967. 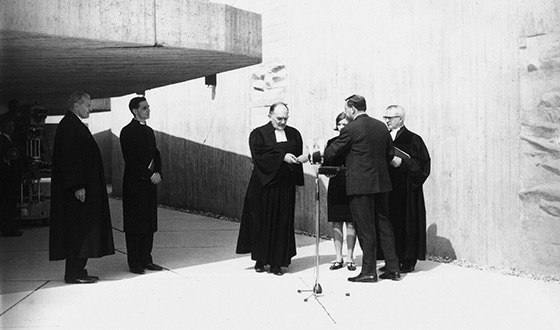 In front of the entrance to the Church of Reconciliation the architect Helmut Striffler hands over the key to Bishop Kurt Scharf (center), chairman of the Council of Evangelical Churches in Germany. (Keystone) 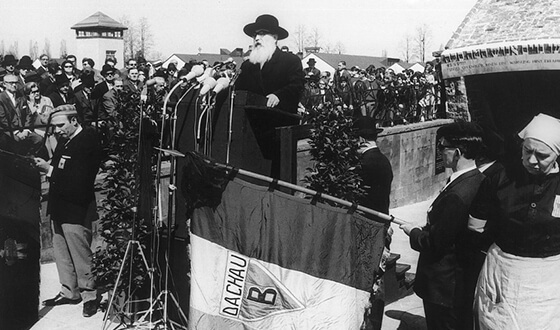 Rabbi David Spiro (center) recites prayers for the dead at the consecration of the Jewish memorial, May 7 1967 (dpa)

On September 8 1968 the International Monument by Nandor Glid is unveiled. The sculptor, persecuted in his homeland Yugoslavia by the Nazis because of his Jewish background, had won an artists’ competition held by the CID. 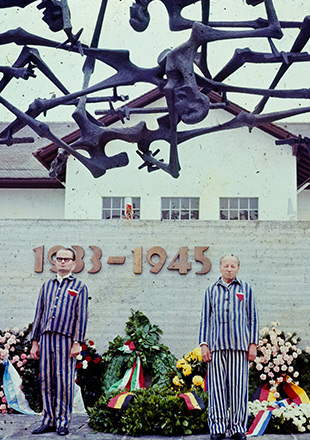 The Memorial Site develops more and more into a place of political and civic education. “Forgotten” victim groups – such as Sinti and Roma, Jehovah’s Witnesses, and homosexuals – make their voices heard. In the spring of 1980 a group of Sinti and Roma go on a hunger strike to demonstrate against ongoing discrimination.

Public interest in the fate of the victims and the work of the Memorial Site increases steadily with the fiftieth anniversary of the liberation of the Dachau concentration camp. A scholarly advisory board is given the task to elaborate a new concept for the Memorial Site. On April 29 1995, the metropolitan of Nizhny Novgorod and Arzamas, Nikolai Kutepov, consecrates the Russian Orthodox chapel.

A section of the new exhibition is opened in the former camp prison/the “bunker”.

On May 2 2003 the new main exhibition, located in the former maintenance building, is opened. The exhibition follows the leitmotif of the “path of the prisoners”. 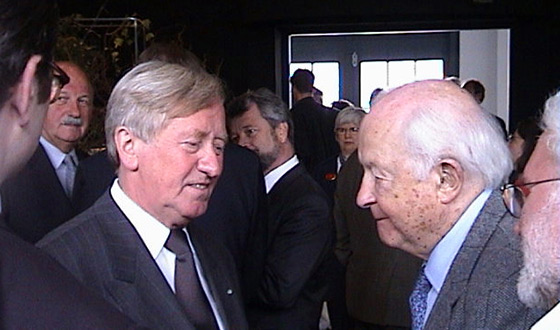 To mark the sixtieth anniversary of the liberation of the Dachau concentration camp, the entrance to the Memorial Site is adapted to fit the actual historical circumstances. Visitors can now enter the grounds through the Jourhaus, the entrance gate to the onetime prisoners’ camp. 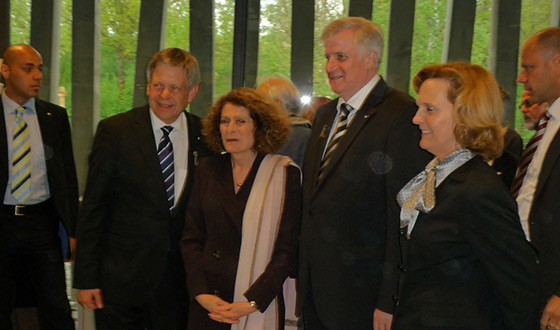 On the night of November 1-2 2014, unknown persons steal the historical postern with the inscription “Arbeit macht frei” (“work sets you free”) from the Jourhaus gate. It is replaced by a replica the following year. 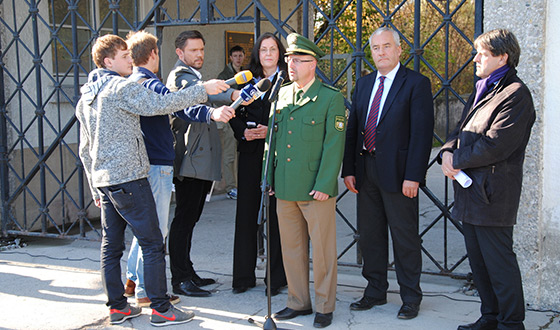 On the seventieth anniversary of the liberation of the Dachau concentration camp, around 130 former prisoners and liberators, accompanied by their families, take part in the commemorative ceremonies. The Federal Chancellor Dr Angela Merkel thanks the survivors for their involvement in education programs as contemporary witnesses and commemorates the dead of the Dachau concentration camp. 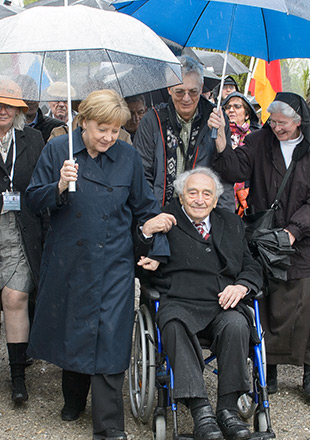 On February 22 2017, the stolen gate with the inscription “Arbeit macht frei” returns to the Dachau Concentration Camp Memorial Site. The gate was found in a carpark in the Norwegian city of Bergen. It is being restored and will be presented in a display case as part of the main exhibition. 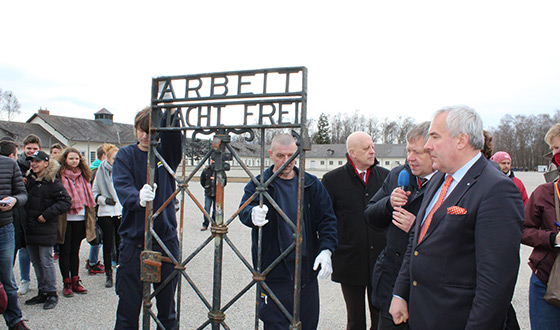