The exhibit and artefact collection of the Dachau Concentration Camp Memorial Site contains a large variety of objects, artistic works, building or mobile relicts from the camp grounds, and archeological findings.

Objects from everyday life, work deployments, and the personal possession of the former prisoners of the concentration camp make up the majority of the collection Relicts from the SS camp are also kept. The art collection is mainly made up of graphic works and paintings. These were produced either during imprisonment in the camp or after liberation as the former prisoners sought ways of dealing with their ordeal and depicting their experiences.

Since 1998 archeological diggings have taken place on the grounds and surrounding area of the former Dachau concentration camp. The findings include bottles, dishware, remains of camp architecture, munition parts.

Most of the collection is inventoried and around half is catalogued in a databank. At present, only a small sample of the archaeological finds can be researched in the databank.

Alongside the archival collection, the collection of three-dimensional objects is an important pillar in the Memorial Site’s research work. Numerous objects are integrated into the permanent exhibition or are presented in temporary exhibitions. Loans are not permitted. 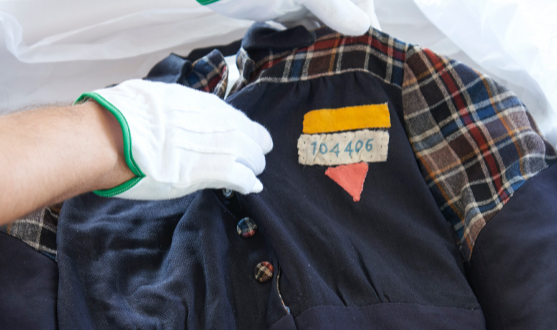 Girl's dress with the Red Angle