Alfred Edward Laurence (b. December 12, 1910 in Breslau as Alfred Eduard Lomnitz) was not allowed to complete his judicial internship in 1933 because he was Jewish. After studying in France he worked in Hamburg from 1936.

In 1936, categorized as a returned “Jewish emigrant,” he was imprisoned in the Sachsenhausen concentration camp and transferred to Dachau in February 1937. On October 1, 1937 the Gestapo released Laurence on the condition that he leave Germany immediately. Via India and Burma he reached the USA in 1941.

He returned to Europe in June 1944, now a soldier in the U.S. Army, and took part in the liberation of the Dachau concentration camp in April 1945. Subsequently he was an investigator in the War Crimes Investigation Team 6826 of the Seventh Army.

In the 1950s Laurence settled in Britain and worked as an industrial consultant and UNESCO interpreter. He died there in 2006. 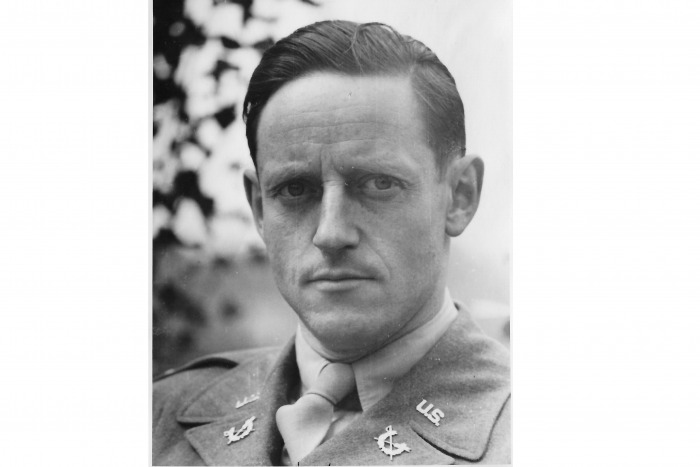 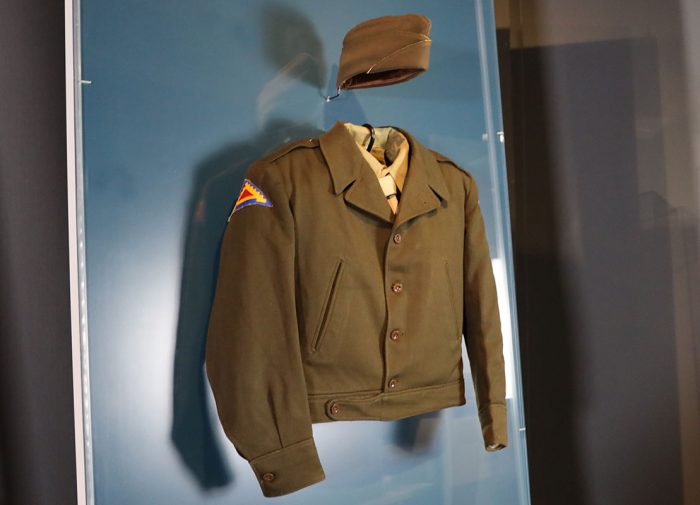 This audio track deals with the uniform of Alfred Edward Laurence, which is shown in the special exhibition on the “Dachau Trials”. It is on loan from the Imperial War Museum in London.
The uniform consists of four parts: a garrison cap, a shirt, a field jacket and a tie.

The garrison cap is made of a wool-polyester blend dyed in a dark olive green. This is the typical colour for the casual uniform of US soldiers in Europe. A silver rectangular badge on the left front identifies the wearer as a First Lieutenant of the US Army.
The worsted shirt and wool field jacket are dyed in a similar olive green. The jacket is a model M-1944, also known as the “Ike Jacket”, named after the Commander-in-Chief of the Allied Forces in Europe, Dwight D. Eisenhower.

Five stripes are visible in the lower part of the left sleeve. Each stripe represents six months of active service in the US Army. Silver badges are awarded for service within the United States and gold badges are awarded for service overseas. The five gold stripes on this uniform thus signify that its wearer has served at least two and a half years of active service in a theatre of war outside the United States.

The tie is khaki in colour and is made of a mixture of cotton and angora wool. The laundry number A9012 is inscribed on the inside in black paint. The numbering of the clothes helped to identify the uniform items when they were washed together with the clothes of other comrades. However, the registered number does not belong to Laurence. His laundry number is L 5383. The inscribed number presumably belonged to the previous owner of the tie.
Together, the four pieces form the complete upper part of a US Army casual uniform typically worn by troops stationed in Europe. Both guards and officers wore this uniform model during the Dachau Trials.