Conference in the Dachau Concentration Camp Memorial Site: Reconstruction or Redevelopment? Approaches to historical buildings and constructs at memorial sites

Conference in the Dachau Concentration Camp Memorial Site: Reconstruction or Redevelopment? Approaches to historical buildings and constructs at memorial sites 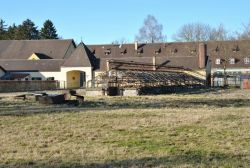 Parts of the site of one of the early external
work details attached to the main Dachau
concentration camp, the so-called herb garden, are in a state of neglect.
Although listed as historical monuments, buildings are dilapidated. What should
be done? Starting from a specific example, the planned conference will explore
general approaches as to how to deal with historical building structures at
memorial sites. As practice shows, the concept of the authentic location is
usually qualified by the decay and reconstruction of historical buildings.

The conference will deal with historical
structures which belonged to the early camp grounds or ensemble of buildings,
are threatened by disrepair, and/or lie outside the actual Memorial Site
grounds. Constructs and elements added after 1945 will also be considered.
Discussion will focus on the preservation, reconstruction and usage of these
buildings and historical settings. When is a building worthy of preservation?
Should or must derelict/dilapidating buildings be reconstructed? How can they
be used so that they fulfill the declared mission of memorial sites?

Drawing on specific examples from other
institutions, the conference will seek to identify the circumstances under
which buildings were preserved, renovated or reconstructed, what kind of costs
were involved, and which utilization concepts were followed. There will also be
room for more general considerations on the subject.

Organizer: The Dachau Concentration Camp
Memorial Site in cooperation with the City of Dachau authority
Location: Jugendgästehaus Dachau
Date: June 1, 2012, 11 am to June
2, 2012, 5:30 pm
Registration is required.
Contact: presse@kz-gedenkstaette-dachau.de
Back