Home | New presentation of exhibits in the permanent exhibition 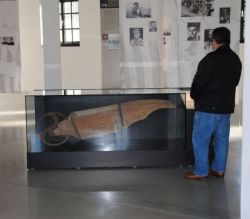 Barrow from the “plantation”; © KZ-Gedenkstaette-Dachau

For the last two years the Dachau Memorial Site has
been gradually reworking the presentation of exhibits in the museum. Exhibits
both already known and hitherto unseen from our collection have been presented
in new display cases. The goal is to improve the optical aspect and the subject
matter of the exposition while giving due consideration to conservational
concerns.

The most recent innovations are two large exhibits.
Firstly, a barrow from the “plantation” work detail is now on display, a symbol
of the arduous working conditions and the daily harassment the prisoners were
exposed to. Besides for the work on the fields, barrows were used to transport
the exhausted and dead back to the camp.

The second large object we are able to present –
thanks to a loan by the Gauting municipality – is a cast of the memorial by
Hubertus von Pilgrim to remember the evacuation marches the Dachau
concentration camp prisoners were forced to embark on. The sculpture is
complemented by a map showing the routes of the death marches and the locations
of memorials along the way. 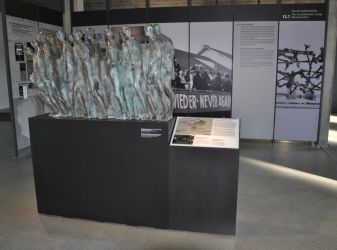 In the spring of this year seven new display cases
were set up for smaller objects. They show objects from everyday life in the
camp (shaving set, plates and dishes), reflect the limited free time given to
the prisoners (tobaccos, books from the camp library, football trophy), and focus
on key themes like resistance and self-assertion (illegal armbands, wall tiles
with notes on imprisonment) as well as mementos of the time imprisoned (booklet
with signatures of fellow prisoners).

Last year two large objects were given a new
presentation and contextualized: the replica of the whipping block from the prisoner
baths and the card file table from the camp orderly room.

The design and setting of the display cases and large
objects was completed in cooperation with the exhibition designers Büro
Müller-Rieger from Munich, the Fritz carpentry firm from Tiefenbach,
Arzenheimer electronics in Eichstätt, and the conservator Ernst Bielefeld from
Niedderroth.