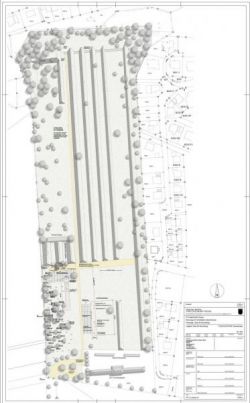 This year the
Dachau Memorial Site is redeveloping the former SS shooting range at
Hebertshausen, expanding its role as a place of remembrance. Located two
kilometers from the former main camp, these grounds are extremely important –
here members of the Dachau commandant’s guard murdered over 4000 Soviet
prisoners of war in 1941/42.

With the
redeveloping of this location, which is also classified as a cemetery, the
Dachau Memorial Site wishes to give more attention to victims from the former
Soviet Union. Although the former Soviet Union suffered by far the largest loss
of life in the Second World War, this fact has hardly been mirrored in
Germany’s commemorative culture. Developing the commemorative site is very
important for Russia, Byelorussia, and the Ukraine.

At the beginning
of this year, working with the State Building Authority of Freising and the
landscape architecture bureau of Keller Damm Roser, the historical remnants
were once again made visible and the historical lines of perspective of the grounds
reestablished. Furthermore, in consultation with the office for Memorial and
Environmental Protection, the undergrowth and a large part of the trees were
removed, foremost in the area covering the one-time shooting alleys. The
historical pathways used will be shall be taken up again and the main wayside
cross rebuilt. A circular path, its design and look distinguishing it from the
historical pathways, shall emphasize the dimensions of the grounds. The
location where the coffins were stored for the murdered prisoners of war and
the line taken by the timber fence, which made it impossible for the Soviet
prisoners of war to escape, will be plotted with ground markings.

In the spring of
this year the Dachau Memorial Site conducted a presentation hearing to collect
ideas for the realization of a permanent exhibition at the former shooting
range. On May 8, an expert committee made of (art) historians, archaeologists,
artists, as well as representatives from the Building Authority and Memorial
Site staff discussed in great length the three designs submitted. The decision
was unanimous: the design created jointly by the Berlin architect Martin Bennis
and the Stuttgart graphic arts firm Weidner Händle Atelier.

The Bennis and
Weidner concept plans to spatially separate commemoration and information. In
line with today’s use, the area designated as commemoration is located in front
of the site of the crime, the pistol firing range. An installation featuring
the names of the victims will be positioned in an extension of the first
shooting alley in which the Soviet prisoners were executed. Made up of
reels, the names of the executed victims can be added step
by step in line with progress in research. As it seems unlikely that all the
names will ever be determined, the unknown victims will be “represented” on the
installation by vacant spaces. This approach will highlight the shocking
dimension of the crime committed.

In contrast, the
information area will be located to the right of the pathway, in front of the
long rifle alley. A
waterbound ceiling will form the exhibition plateau. To the right and left of this plateau 16 exhibition panels will be erected
and directed towards the visual axes associated with specific themes (e.g.
biographies of the victims in the in the direction of the execution site). The
themes and issues to be presented as part of the exhibition are currently being
research by a team from the Dachau Memorial Site. The exhibition will look at
the murder of the Soviet prisoners of war in terms of the historical context,
provide information on the prisoner-of-war camps of the German Army and the
execution sites, and describe the usual course of an extermination action in
Hebertshausen. So as to lend the victims a face, it is planned to honor
individual victims with a biography. In addition, a group biography will be
used to provide information about the group of SS perpetrators, while the
knowledge and the attitude of the population will also be addressed. To
conclude, the exhibition will discuss the relevance of the SS shooting range as
well as the reuse of the grounds and how society has responded to this. Single
steles along the circular path will provide information on the topography of
the grounds.