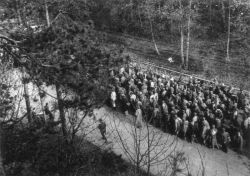 Only a few of the some 25,000 prisoners of the Dachau concentration camp
forced onto the death marches found the strength after 1945 to write down their
experiences. The Memorial Site archive preserves their accounts of hunger,
senseless exertions, dangerous air strikes, and brutal murders in the final
hours before liberation. The solidarity amongst the prisoners was put to the
test, while for the first time the civilian population was confronted with the
horrors of the camp system.

The International Tracing Service in Bad
Arolsen takes up the theme of the “death marches” in its first scholarly
yearbook, to which the archivist of the Memorial Site, Albert Knoll, has
contributed an essay.