The International Monument was inaugurated on September 8 1968. It was designed by Nandor Glid, who himself was persecuted as a Jew by the Nazis in his home country of Yugoslavia and had joined the resistance to the German occupation forces at the end of 1944. The sculptor won a competition organized by the CID, the association representing the survivors, in 1959.

The International Monument can be walked through and is made up of different elements. It is based on the idea of a path of education and catharsis. Coming from the Jourhaus, visitors to the Memorial Site face an entry wall. Its inscription calls the visitors to follow the example of the prisoners and actively defend a society without terror and tyranny. The path leads to the lowest point of the Monument, representing the despair and suffering of the prisoners. The central bronze sculpture shows human figures entangled in barbed wire. It is framed by stylized concrete pillars, which symbolize the guard installations.

Opposite the sculpture, a relief in the form of a chain symbolizes the solidarity between the prisoners in the concentration camp. The relief features triangles in different colors, recalling how the SS categorized the prisoners. The black triangle for the so-called “asocials”, the green triangle for the so-called “professional criminals, and the pink triangle for homosexuals are not represented. These victim groups were not recognized as persons persecuted by the Nazis at the time the Monument was erected. Their fate has only first gradually attracted public interest since the 1980s.

At the end of the ascending path, a tomb contains the ashes of an unknown prisoner. Inscribed into the wall behind the tomb in five languages is the exhortation “Never Again”. 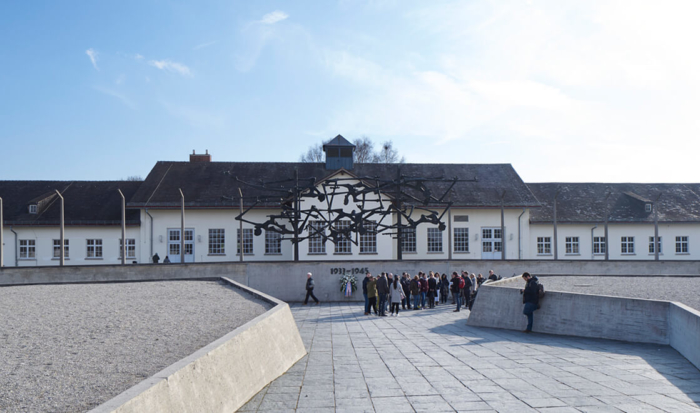 Relief with the triangles linked together in the form of a chain, 2017 (Dachau Concentration Camp Memorial Site)