As part of the expansions made to the camp in 1937/38, the SS had a complex of 34 barracks built. Comprised of four functional and 30 accommodation barracks, the complex was then demolished in 1964/65. The two structures today located where the former camp road began are replicas erected in 1965. The reconstructed barrack on the eastern side features an exhibition on the accommodation and living conditions of the prisoners. Concrete foundations cast in 1965 mark the positions of the other 32 barracks.

Each of the prisoner barracks, also known as “block” in the language of the camp, was divided into four “rooms”. Each of these “rooms” was in turn made up of day quarters furnished with tables, stools, and lockers, as well as sleeping quarters with wooden bunk beds. The prisoners were defenseless against the brutal despotism of the SS block leaders who bullied them with strict and minute regulations on the cleanliness of the floors, how things were to be arranged in the lockers, or how the beds were to be made. Even the slightest of deviations from the draconian standards was severely punished.

Each of the accommodation barracks was designed to hold 200 persons; towards the end of the war, the barracks were full to overflowing however, with up to 2,000 prisoners crammed into a barrack. Located in the first barrack on the left of the camp road were the canteen, the camp orderly room, the library, and the SS museum, as well as instruction rooms for the prisoner personnel. On the right of the camp road was the sickbay, which was continually extended to include more barracks given the disastrous state of the prisoners’ health. Behind the sickbay were the punishment blocks and quarantine barracks for the newly arrived prisoners. 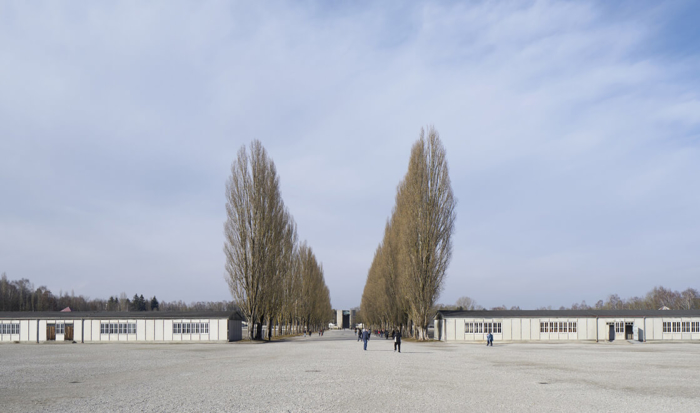 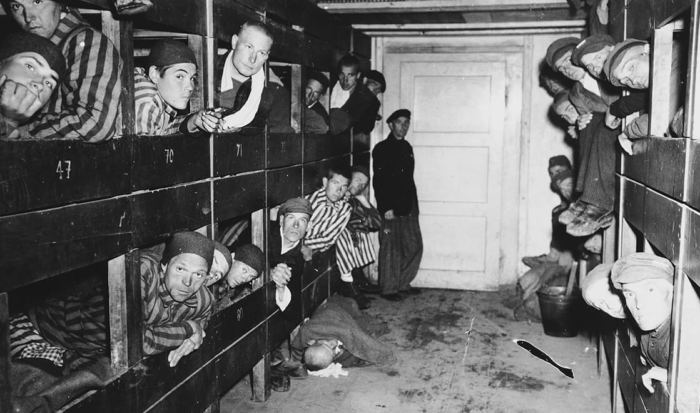 Former prisoners in bunk beds immediately after their liberation, May 1945 (USHMM)

“Make the beds! Oh, what a dreadful order, mirroring the whole bloody stupidity of camp discipline. A straw sack is naturally round. But it has to have corners! Like a cigar box. […] Planks and little boards surface out of hiding places, specially carved for this purpose. Through a slit in the sack the straw is bulked up with a stick and stuffed against the edge, then a little board is held against it to press it flat. The sheet is carefully spanned over it and a sharp edge is ironed in on the side.”