Part of the extension work on the camp in 1937/38 included guard installations designed to make escape from the prisoner camp impossible. As the grounds were turned into a refugee camp in 1948, the camp fence and one guard tower were removed. In the 1960s, with the developing of the area into the Memorial Site, the missing guard tower was reconstructed, while the remaining towers, in part in a state of dilapidation, were restored. Sections of the camp fencing were rebuilt to provide visitors with an idea of what the guard installations were like. These reconstructed sections are located to the east of the former maintenance building and at the entrance to the crematorium area.

The prisoner camp was surrounded in the north, east, and south by a three meter-high perimeter wall fitted with barbed wire. In the west, the River Würm served as a natural boundary between the prisoner camp and the SS compound. Located on the camp-side of the perimeter wall and the Würm was an electrified barbed-wire fence, a barbed-wire obstacle, a two meter-deep ditch, and a grass area. The SS cynically called this strip the “neutral zone”. If a prisoner entered this area, he was considered to be trying to escape and was shot without warning by the guards. The guard installations included seven guard towers, fitted with machineguns and manned by SS sentries around the clock.

In their absolute desperation, those prisoners no longer able to endure living in constant fear under the SS regime of terror chose to die – they deliberately entered the “neutral zone” or threw themselves against the high-voltage barbed-wire fence. Sometimes the SS guards forced prisoners onto the prohibited area and then shot them because they were allegedly “trying to escape”. 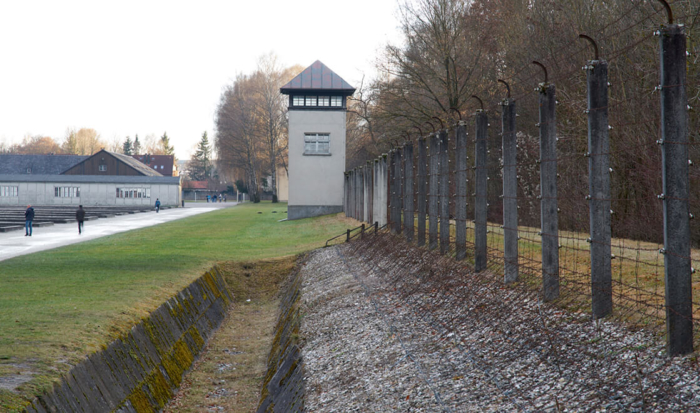 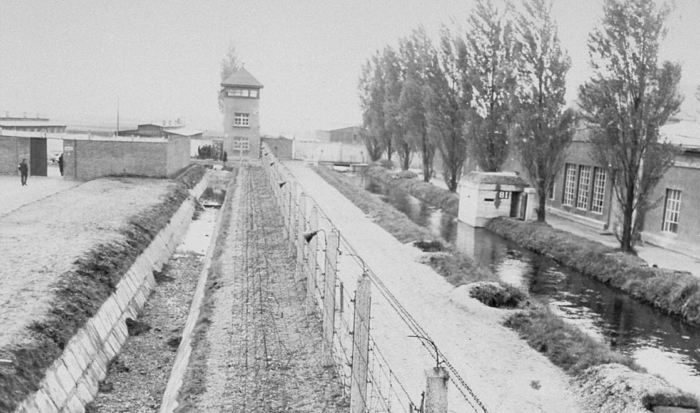 View of the western guard installation with tower, May 3 1945 (USHMM)