After arriving in the prisoner camp, the inmates were first taken by the SS to the shunt room in the maintenance building. “Shunt” is a term from the penal system and means a “prisoner transport”. The new arrivals were subjected to a degrading procedure, forced to endure the violent deprivation of their personal rights and liberties.

A row of tables was set up between the pillars in the shunt room, dividing the room in the middle. Standing behind the tables were prisoners who the SS forced to work in the so-called “prisoner possession administration”. The SS ordered the newly arrived prisoners to strip naked and hand over their clothes and personal possessions. The prisoners at the desks listed these items. The new arrivals then had to move on to the prisoner baths close by, fully naked.

The layout of the exhibition room today takes up the spatial arrangement of the historical shunt room. Today, display cases are located where the desks once were, containing original personal items of former prisoners. The sign “Rauchen verboten” (“Smoking prohibited”) on the wall of the former shunt room was uncovered in 2000. 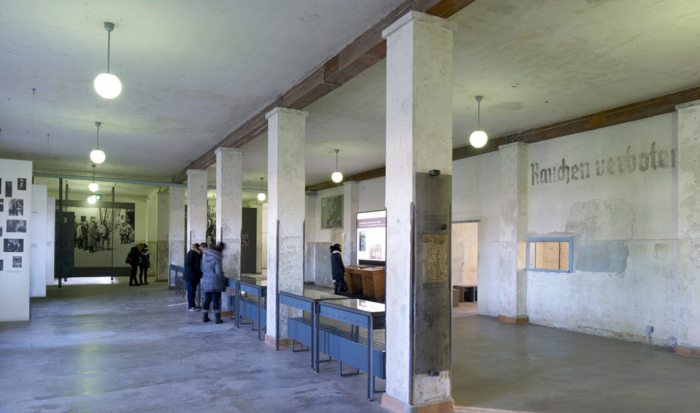 “We’d stopped being a person. Everything focused on killing off your sense of shame, breaking your will, and forcing the prisoner into pitiful blind obedience. It wasn’t about if one was an intellectually or morally valuable human being, everyone was equal and everyone was judged to be criminal.”